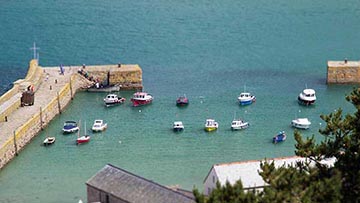 2018 Looks to be an excellent year with events popping up all over Cornwall. From Food Festivals, music festivals, sailing regattas and surfing championships there is something for all ages. Here are just a few of the notable events happening in Cornwall this year.

Porthleven Food Festival: April 20th - 22nd.
Now in it's tenth year, the well established festival begins on April 20th in the stunning harbour port of Porthleven just 15 miles from Portreath. Entertainment from acoustic music performances by some of Cornwalls upcoming artists runs throughout the weekend and into the night.

The Food Festival includes the Chefs Theatre from the very best Michelin-starred chefs to international celebrities and local stars. Last years lineup included Antony Worral Thompson and Jack Stein and we expect 2018 to be even better.

Eden Project - Various Events
Throughout the year the popular Eden Project is running a wide variety of events throughout the year including The World Pasty Championships where leading pasty makers celebrate the original Cornish recipe as well as more unusual varieties. This event runs on 3rd March.

For the runners among you the Eden Marathon & Half Marathon runs on the 14th October. The multi-terrain route through spectacular countryside. Registration will be open soon but get in there early because the places fill up quickly.

The Eden Project runs events throughout the summer for updated information visit their website at http://www.edenproject.com/

St Ives September Festival: 8th Sept to Sunday 22nd
Started in 1978 the Festival lasts fifteen days offering a wide range of music, arts and literature at selected locations throughout St Ives. The Festival has a wide range of entertainment and including the much acclaimed Hackney Colliery Band who have enjoyed success since their appearance at the 2012 London Olympic Games.

Ticketed gigs take place in The Guildhall and The Western Hotel which hosts a full program.

Other attractions include excellent workshops & classes, arts exhibitions, talks, walks, theatre comedy, films, cabaret, street entertainment, poetry and many other events. There is something for all the family during the festival.

Check back here each month for updates on upcoming events local attractions to make the most of your stay at our properties.